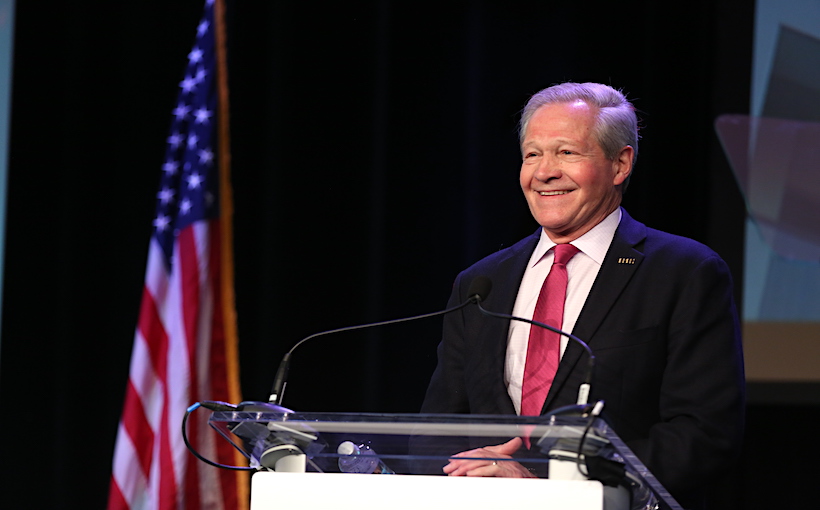 When Douglas M. Bibby stepped into the role of President of the National Multifamily Housing Council in 2001, he faced a handful of challenges. At the time, rental housing was considered the purview of lower-income families or as way stations to home ownership. The office and retail sectors enjoyed a 200 basis point advantage over multifamily. And technology was practically non-existent. Basically, “Investors didn’t understand the stability and predictability of the sector,” Bibby told participants at “Expert Insights on NMHC and the Multifamily Industry.”

What a difference 20 years makes. These days, “we’ve built the story that multifamily today is a highly-valued asset, respected, up on the technology curve; investors understand our business and prefer our business,” Bibby said.

Bibby joined three other renowned multifamily leaders at the hour-long session, all of whom are past NMHC chairs. Moderated by Walker & Dunlop’s Chairman and CEO Willy Walker, the event took place (and was recorded) at the January 2022 NMHC Annual Meeting, and presented as the March 16, 2022 Walker Webcast.

The discussion ranged across a variety of topics, from affordability, to diversity, to legislation – and, of course, Bibby’s upcoming retirement from the NMHC.

Affordability came up often in the conversation, a constant reminder of its importance. Bibby noted that while housing affordability is a national issue, it’s mostly dealt with on the local level. Challenges such as exclusionary zoning and NIMBYism are “running rampant and restricting the ability to build housing,” he noted.

David Schwartz, CEO, chairman and co-founder of Waterton, commented that the NMHC did roll up its sleeves and is working in some local battles. “A lot of the local apartment associations might not be set up to take on these major fights,” said Schwartz, NMHC’s immediate past chair. “We can help mobilize, we help raise money, we help on-the-ground work and help with public relations.”

Adding to the affordability discussion, Avanath Capital Management Founder, Chairman and CEO Daryl J. Carter pointed out that affordable housing as an investment is regarded more positively in Europe and Asia. “They view it as a good asset class, with appropriate risk-adjusted returns.” Meanwhile, in the U.S., building and/or converting into affordable housing can be incredibly expensive. “The need is incredibly great,” remarked Carter, who served as NMHC chair from 2014-2016. “We can try to move the needle, but it’s difficult.”

Speaking of affordable housing, much of the panel discussion revolved around rent control and moratoriums and, more recently, rent inflation. Schwartz said he spoke to Sam Zell at ULI about rent inflation in the 1970s, only to be told that there was no such thing in the 1970s, due to overbuilding. Today’s rent inflation, Schwartz went on to say, is definitely due to underbuilding. Sue Ansel, president and CEO of Gables Residential, added that using rent control moratorium in the 1970s to control escalating rent costs wasn’t a very good idea then, and it isn’t now. “What happens in one stage will spread,” she observed, adding that a unified discussion needs to take place so people understand the ramifications of rent control.”

On the diversity side, Carter noted that, while progress has been made in the industry, but there is far to go. Minority access to capital continues to be an issue, he said. Ansel explained that leadership efforts at her company continue to focus on it, and for good reason. “We have to look like the people we’re serving,” said Ansel, who served as NMHC chair from 2018-2020. “My organization isn’t there yet, but it’s not an initiative. It has to be part of the core.”

While Bibby used the opportunity to thank his staff for helping him out through the years – “I’m proud of them,” – he remarked, the other panelists shared their thanks to Bibby for his dedication to the NMHC. “I’m going to miss him,” Schwartz said, acknowledging getting emotional throughout the conference. “I have a feeling that he’ll continue to be involved. This has been a ride of a lifetime for me.”

Ansel expressed gratitude that she was able to work directly with Bibby, indicating that “I’m proud of all that has been accomplished under his leadership, and thankful for the opportunity.” And Carter expressed his appreciation for gaining the tools necessary for empowerment and making change.

“You and Cindy (Chetti, NMHC Senior Vice President for Government Affairs) took us up on (Capitol) Hill. We didn’t know what to say, but you taught us how to say it. We can do this on our own now. You marshalled us, and trained us, and expanded what this industry does.”