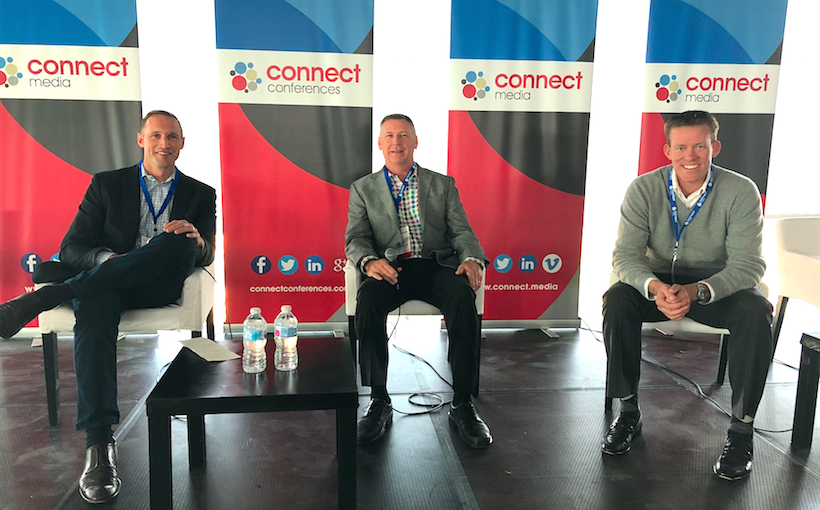 Nearly 450 commercial real estate leaders gathered in Irvine on Sept. 25 for Connect Orange County. The event kicked off with tours of Trammell Crow Company’s newest office development, The Boardwalk OC, and concluded with a cocktail reception on the eighth-floor outdoor terrace overlooking the two-acre courtyard. Four panel discussions included an overview of development activity and financing of projects, how industry pros are getting deals done today and a legislative update of key issues facing CRE.

The Redevelopment and Reinvestment in OC panel, which was moderated by KTGY Architecture and Planning’s Chris Texter, provided an overview of redevelopment efforts across the county.

Pendulum Property Partners’ Kevin Hayes said his company is pursuing a number of redevelopment projects across the region. They range from a mixed-use project in Huntington Beach, to a 12-acre office re-entitlement project in Ontario, to a former Naval training center in San Diego.

Hayes pointed out that developers face challenges to re-work projects, even if the project use remains the same. In the case of Peters Landing, a 1970’s-era mixed-use project originally built by iconic L.A. developer Rob Maguire, getting what is envisioned as a beach destination under construction encompassed a “complicated entitlement process,” he says. That, despite the mix of uses from the original project staying the same. Pendulum is seeking to focus the merchant mix more toward food and beverage in the next incarnation of Peters Landing.

In the case of Pendulum’s project in the Inland Empire, they found a site west of the popular Ontario Mills Mall and near the Citizen’s Bank Arena. The former site of the Ontario Speedway on 4th Avenue will be developed into the Brickyard, and will include a 260,000 square feet of retail and office space.

Paragon Commercial Group’s Jim Dillavou said his company pursues retail redevelopment projects, mainly in partnership with CalPERS, that are focused on value-add plays. “We like tough, difficult deals that are hard for owners” to execute without deeper pockets, he says. The company is able to bring capital to the table to help revitalize properties in the right community.

An example of that is Rusty Leaf Plaza in Villa Park. The Orange County neighborhood has changed over time, and the large footprints of grocery stores have shrunk from as much as 40,000 square feet to the 20,000- to 25,000-square-foot range today. He points out grocers have figured out how to do more with less space by being more efficient. The retailer must focus on the right merchandise today, too. He says bringing in a smaller format Target store in place of a Ralphs has worked well.

Dillavou also says they may pursue “off the beaten path deals.” That also includes projects with longer gestation periods, which was the case with a project in Manhattan Beach that opens next month, which spanned 30 months.

One of the ways Dillavou says they seek to capture opportunities others may have missed is to explore other uses of land. In the case of faltering big box sites, there could be excess land or large parking lots that are ripe for new uses. Outparcels could be sold, and often times cities will want to work with a developer to rezone the land for other uses that help revitalize the center and align better with community needs today.

The trend to demising space is “becoming more prevalent,” says Dillavou. Paragon has taken large, 80,000-square-foot grocery space and divided it up into multiple spaces for three or four tenants. He’s also seeing uses like urgent care centers work well because of the aging population and it has proven to be a “very sticky and cross shopping” strategy, as has the addition of electric car charging stations.