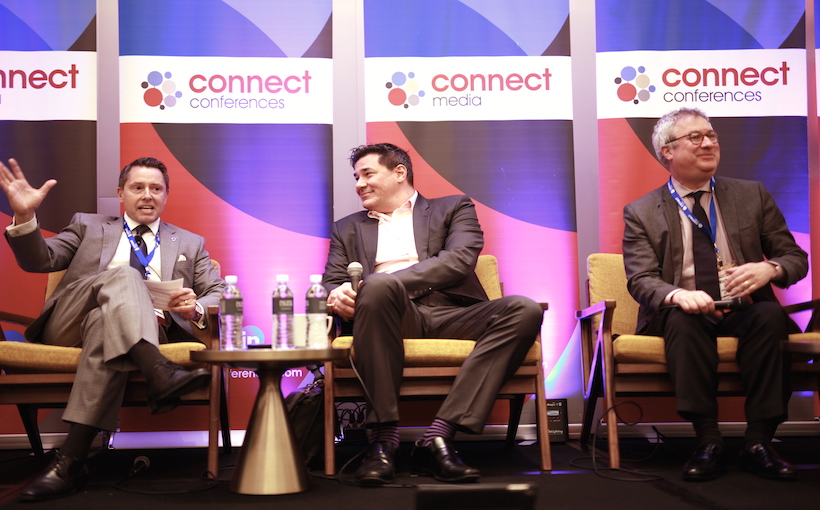 These two highly-respected economic experts examined the labor and housing markets, job growth, demographic trends, and other key drivers influencing the national, state and regional real estate markets. The robust discussion was moderated by Kidder Mathews’ Robert Thornburgh and focused on indicators that determine the strength of the economy, as well as explored the potential for a recession.

Beacon Economics’ Thornberg opened the conversation noting that however intriguing it may be to predict an economic downtown, it would be difficult to predict what “negative shock” would pull the economy into a recession. He says, those concerned a recession is just around the corner just because the recovery has been going on for so long, should be concerned with other factors. He says, “the length of an expansion doesn’t determine when it will end.”

Thornberg believes the strong fundamentals just don’t add up to a “problem now.” He compares today’s disciplined market to 2006, when there was “massive amounts of over-building, over-borrowing and overspending. The consequences were obvious if wanted to open eyes and look,” Thornberg said. Today, he notes, although there seems to be political chaos, when you look across the economy there isn’t an imbalance in the underlying fundamentals.

USC Lusk Center’s Dr. Green believes the economy has some run left in it, though advises to be prepared for a gloomier picture in 2019. The reasons behind Green’s perspective included the sell-off by a couple of sage investors who have historically had “good judgement.” He notes they’ve already divested most of their properties, which could signal the current cycle may be nearing an end. Typically, those investors haven’t worried about when the peaks exactly arrive, but they tend to “have a pretty good sense of the peak” as assets start seeming “too pricey”.

He also is concerned the nation’s senior governmental leaders are potentially making decisions, such as the tax cuts, that could create the “shock that could drive us into a mild recession,” Green said.

What worries Green about 2019 is the tax cut was very small for those making under $70,000, and it will be “obliterated” by the increasing health insurance premiums once the Obamacare program ends.

Green’s also got a watchful eye on increasing interest rates, which is likely going to make consumer credit more expensive. He points out for borrowers earning $60,000 to $70,000 and below, more of their paycheck will be taken out by debt service. He believes that’s a “shock that could drive us into a mild recession in 2019.”

Both Green and Thornberg agree the flattening of the yield curve is a powerful predictor of the business cycle.

Thornberg says “the biggest potential issue is the aggressive” actions by the Federal Reserve, which could flip the yield curve and cause a problem that would create a recession in 2020 or 2021. His view is that the economy will be “fine” for the coming 24 months or so. And if there is a recession, it will be “mild” because there aren’t “massive imbalances to create a big downturn,” he says.

The Fed’s actions to raise interest rates perplex Thornberg, since he believes the “chance of inflation is almost nil” given the strong economic fundamentals. That includes the current low pace of inflation, flat bank lending, low unemployment and available capital seeking a place to call “home.” He would be surprised if the inflation rate gets to 3.5% over the next couple of years.

However, Thornberg is concerned about a change in the tax code that removes corporation’s ability to write off interest expenses. That would have encouraged them to over borrow, but instead they may get rid of leverage and dump more capital into the market. He notes that suggests the long end of the curve will remain.

Green noted he is a bit surprised that the tax bill hasn’t led to increased stock market investment, since the bill reduces debt preference and gives “enormous preference to equity.”

Yet, mortgage debt is “barely expanding,” notes Thornberg. The leverage ratio in American real estate is still falling, and outstanding debt is not an issue at this point in time,” he points out. Green says, credit is still tight for home borrowers, and the U.S. is not seeing anything like the lending in 2005 and 2006.

In the coming decade, Thornberg predicts an “enormous problem” is on the horizon. He says the country is on the precipice, with the Federal government needing to borrow heavily to pay the retiring Baby Boomers.

Another big issue for California is housing, which may be causing companies to shift operations to other states where affordable housing is available. Since L.A. County has reached the lowest unemployment rate ever, companies simply can’t find people to hire because there aren’t enough who can find affordable places to live.

California and Los Angeles are net importers of college degrees and net exporters of high school diplomas, points out Green. The result is those with diplomas moving in bring spending power that pushes up housing costs and further pushes out those who can’t afford to live in the state.

Green believes two property sectors are in strong positions. “I think so long as you do not have too much leverage, apartments and industrial going to be fine. There may be a cycle, but it will be small,” he predicts. The key is to make sure when you go to refinance, when the loan is due, there’s equity to keep going. Cash flow not going to be a problem in those sectors,” Green says.

Thornberg concluded that he believes the state still has the “momentum to carry the economy over the next two years.” Yet, he cautions, “between the nice 2 to 3 years and the decade period, somewhere there’s going to be a flip,” he says. It may come when people aren’t afraid, but he advises paying attention, because “there’s always a next recession.”