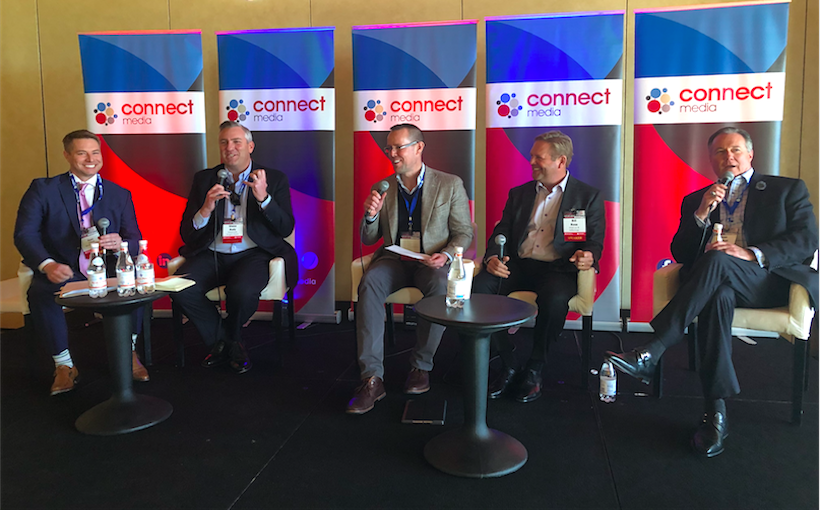 The Up, Up, Up? Investment Sales in 2019 and Beyond panel at Connect Retail West explored what’s next for the sector. The conference was held January 22, 2019 at The Resort at Pelican Hill, and drew a crowd of 300 to hear from innovators in the retail space.

Investment pros put the recent market volatility and changing trends into perspective, as the year of consolidation, dispositions, and redevelopment unfolded. Investment sales leaders shared what they see for the future and the next cycle.

For one, the tenant mix is shifting at properties across the spectrum. CBRE’s Philip D. Voorhees says rent rolls are being transformed and now contain medical, fitness and other service, as owners adapt to factors such as consumer shopping preferences, online options, demographics or convenience. He predicts the better malls will still survive, though the poorly performing ones will “go away” and the deck will get cleared. Still he cautions, the start of 2019 could potentially be a bit bumpy because of the government shutdown, the equity dip and other factors, which could create a trickle down effect on consumer confidence and spending. Voorhees predicts, so long as debt remains attractive, 2019 sets up as a positive year.

NKF’s Glenn Rudy holds an optimistic view of retail. He says, “at the granular level, retail is alive and well. It is here to stay.” Rudy pointed out 90% of sales still occur in stores. E-commerce has not killed brick-n-mortar, rather, he says, “it has enhanced it as online retailers have invested in themselves and their omnichannel experiences.” He cites clear evidence of retail’s health is the record annual sales achieved last year, and high, 45% year over year increase in sales. He notes, the right kind of retail continues to thrive.

Passco’s Alan Clifton agreed that the retail numbers may not reflect what the reality is, and the way markets may be valuing the sector. He says, “We’re America and we’re built on change” and the ability to adapt to change. He expects new visions to be created, as the “next generation” emerges within the retail sector.

Another positive perspective was offered by Marcus & Millichap’s Bill Rose. He says it is not “doom and gloom” for the retail industry, rather the sector is transitioning through an “evolution.” An area of concern for Rose is the market plateaued from 2015 through 2018 though. As a result of that flattening, he advises investors to pay attention to job growth, money supply constraints, and in a low interest rate environment if values plateau.

In terms of the hottest markets, or most in-demand properties, some panelists say there’s not much product available that fits a core investment strategy, as owners are more than likely to hold onto assets.

Passco’s Clifton says part of the reason owners are holding on to properties is because there hasn’t been available assets to buy once they sell an existing property. He believes there will be more private ownership come to market this year.

CBRE’s Voorhees says, “I think the differentiation in pricing from a primary to secondary or tertiary markets right now is really very healthy and indicative of the overall opportunity that exists.” He notes that in the better markets where there’s no new construction, institutions, pension funds and advisors are simply not going to sell because they can’t replace it. “Many of those folks are assets under management model, where they get paid in part for the amount of equity they have invested. So if you can’t redeploy, you’re surely not going to sell.”

Gillard says one selling strategy that may gain favor is breaking up larger deals into smaller slices. That means centers that have the ability to sell in pieces may end up doing so, which could result in a $40 million center being sold in $8 million to $12 million pieces. Though, Rudy says, under that “parcelization” scenario and absent an institutional buyer, sellers need to be ready to retain pieces of the project since not all pieces may clear.

Still, 2019 is shaping up positively at the outset. Rudy pointed out that by end of Q1 2019 his NKF team will have been to market or taken to market the same amount of deal volume in terms of dollars as it closed in all of 2018. “It is setting up to be a huge transactional year in ’19, very early in the timeline,” says Rudy, though he believes that is being driven by the fact that many investors had previously remained on the sidelines on the buy side.

Passco’s Clifton summarized, there’s “enough capital out there if you want to buy.” The decision comes down to asking: “What am I risking? What do I want for returns on my investment?” And, ultimately, determine is “this good real estate? Because good real estate is going to do well,” he says.