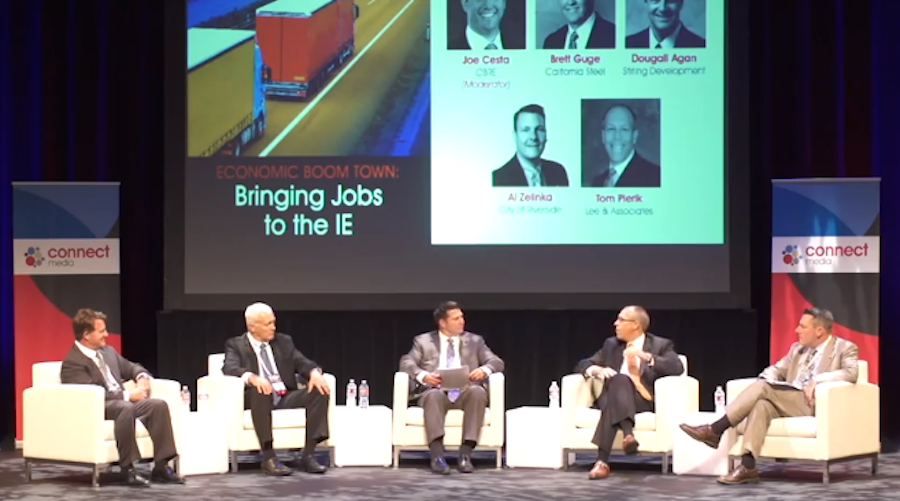 Inland Empire employment is bound to increase — a lot — if activity in the region keeps up at the pace its enjoyed in recent years.

Speakers at the recent Connect Inland Empire conference at Victoria Gardens in Rancho Cucamonga illustrated why a new flood of workers and residents could be hitting the region in years to come, mainly due to its booming logistics industry.

For one thing, there are some major industrial projects under development and in the pipeline. Two specific ones mentioned were Stirling Development’s Southern California Logistics Centre, in Victorville, which will have 60 million square feet of industrial space as well as other uses when completed, recently-approved World Logistics Center in Moreno Valley from Highland Fairview, which will total over 40 million square feet.

Part of the reason for so much growth by companies in the area, which will lead to increased Inland Empire employment, is a rise in the cost of labor in China and more reliable transportation in the United States than shipping things from overseas, pointed out Dougall Agan, Stirling’s president and chief executive officer.

But to attract Millennials, the coveted younger workforce, there needs to be more than just distribution centers, he said.

“They want vibrancy,” Agan stressed. “They want to have entertainment and culture. It’s one of the most challenging and exciting times from a planning standpoint.”

One of the cities that is trying to create this type of environment is Riverside. The city is trying to attract industries other than logistics, and encourage developers to build more live-work-play properties. These are the things that make urban locales more popular, and drag Inland Empire college grads away from the area.

“We need to diversify our economy and keep younger people here,” said Al Zelinka, Riverside’s assistant city manager, pointing out that his staff is beefing up to meet the demand for new projects. “We’re hiring like crazy.”

On the office side of commercial real estate in the Inland Empire, hiring is also looking up. When the recession pounded the area, vacancy rates were at a dire 25 percent, but now they’ve dropped to around 16 percent, said Lee Pierek, a Lee & Associates senior vice president. It’s not quite a spec-office-building environment, but don’t be surprised if that doesn’t happen in about a year or so.

“We’re seeing incredible rent pressure on the coastal markets,” Pierek said. “That will hopefully create some additional pressure for companies to look [here].”

Plus panelists pointed out that there is more foreign investment coming to the market, making the Inland Empire more competitive.

“This region has the land, opportunity and vision to really build a more complete community that makes it a great place to do business,” Pierek stressed.

“Erik’s legacy and what he is all about is how he has always treated everyone he has come into contact with, personally and professionally, with dignity and integrity,” said Terry Thompson, San Bernardino County’s director of real estate.