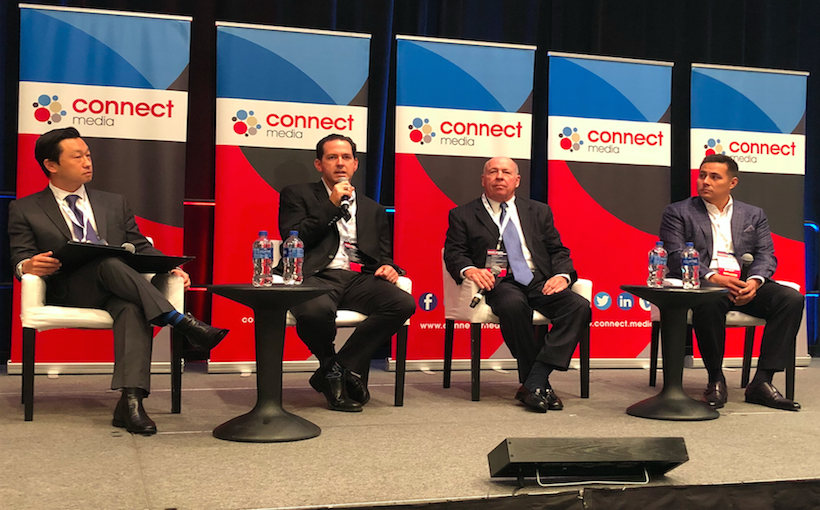 Industrial Development and Investment: How Far Can Projects Spread?

Connect Inland Empire returned to the Ontario Convention Center on October 24 for an annual conference that attracted 250 attendees for an afternoon of informative panels, networking and cocktails. The conversations centered around the impact of population, employment and e-commerce growth that have served as key drivers of the industrial development market. Not only has the Inland Empire emerged as a well-connected region, its future prospects remain bright.

A panel titled Industrial Development and Investment: How Far Can Projects Spread? was moderated by Greenberg Glusker’s Brian Kang.

Kidder Mathews’ David Burback notes the statistics on the Inland Empire market make it nearly impossible not to be bullish about it. “It truly has exceeded expectations. Both investment and development have exceeded expectations the past three years.” Over the coming year, Burback notes rental growth in the neighborhood of 6% to 6%, though he points out “we did 13% year-over-year, that’s a good market.” He believes the market will remain positive for the coming year to 18 months, as there is a “good balance” between supply and demand. It has been an “unprecedented ride” the last three to four years with rental rates, building and land values, he says. “We may have jumped a shark and are now catching our breath, but I don’t think the market retreats until 2Q 2019, when it may start to level out.”

CapRock Partners’ Nicholas Ilagan says the company is “bullish on the market as a whole,” especially “west of the 15 [freeway] because we see opportunities there.” The farther east, there may be a little bit more caution. In part because of the higher drayage rates companies have to pay the farther they move away from the ports, though he notes some companies are adjusting their transportation and warehouse strategies to alleviate some of that. And so too could the arrival of autonomous trucks.

In terms of the types of companies kicking the tires in the market, Ilagan notes they are seeing a “tremendous amount of activity” from smaller, 200,000-square-foot and under tenants, in particular, the food manufacturing distribution occupiers that are being pushed out of the L.A. Basin’s Mid Counties submarket by higher rates.

Burback notes they are seeing other larger players in the market besides Amazon. “E-commerce is sexy and a good story with huge growth that will come to the Inland Empire,” he says, though the historic user base of warehouses remains an important factor in the market.

Rexford Industrial’s Patrick Schlehuber says the tight conditions and competition for space in the Los Angeles Basin is driving more activity into the Inland Empire. Consider that there may be only a dozen 500,000-square-foot buildings available in L.A. County, while the Inland Empire has availabilities. “The optics tell us they will be filled up” because of a lack of choice, he points out.

Schlehuber notes one change they’re seeing in the market is that tenants are tending to demand a higher level of finishes in projects. That means the 3,000-square-foot office component of a 600,000-square-foot industrial facility “can’t be plain Jane.” That may include 12-foot ceiling heights, 10-foot doors or marble counters in the office. Brokers tell him that when comparing buildings, those with higher finishes may lease nine times faster.

Rising interest rates, a trade war and regulations were among the threats to the market panelists identified. Burback says they could “affect future development and have a big impact on this region. CEQA issues remain a concern, though Burback notes most developers have “baked it into most project proformas today.”