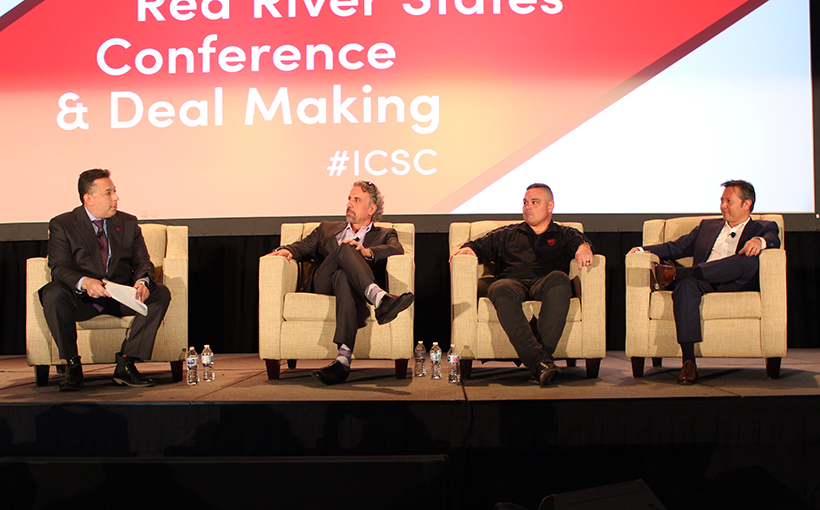 ICSC Red River States: The Retail Sky is Not Falling

That is the message attendees took away from two sessions at the recent inaugural ICSC Red River States Conference & Deal Making event. The three-day conference, which took place in Fort Worth, brought together deal makers, attendees and exhibitors from, and interested in doing business with, the Red River states of Arkansas, Louisiana, Oklahoma and Texas.

Participants also took some time to attend presentations and panels. Valerie Richardson, ICSC Chairman and The Container Store’s Vice President — Real Estate, focused on an industry update, pointing out that holiday sales are expected to have increased by 5% or higher, “putting us on par from where we were last year.” Also of note: Convergence between brick and mortar and online.

“All of the apocalyptic sayings from a couple of years ago are showing up as brick-and-mortar opportunities,” she said. One report she cited was the ICSC’s recently-released “The Halo Effect: How Bricks Impact Clicks,” which showed that physical stores can boost online shopping. “When you talk to shoppers and consumers, a significant number of them — almost 80% — want to shop in stores,” Richardson said. “It doesn’t mean they don’t want to shop on-line. They do.”

Richardson also noted that food and beverage is doing well, while overall, the customer still continues to look for experience in retail.

The “experiential” part of retail was explored further in the “Retailer Showcase,” a panel that shared the importance of aligning different experiences with shopping. Moderated by David Schnitzer with Ascend Commercial, the panelists focused on whether experience and retail are becoming old hat (it isn’t), if customer service is still important (it is, definitely so) and what fundamentals — such as demographics — are necessary when it comes to finding the ideal site.

Neil Baron, with the dining-in theater chain Cineopolis USA, said that demographics was absolutely crucial; the company is targeting a more-affluent customer. “We look at household median incomes of $70,000 and above within a three-to-five-mile range,” he said, adding that, depending on the market, that income could vary.

Meanwhile, while Lavaca Cantina’s Ian Vaughn indicated that much of his demographic was female, “it depends on the artist we bring in.” Because Lavaca Cantina brings in live entertainment of all kinds, along with offering food and drink, the demographics can change. As such, the entertainment venue, in a retail center, can help increase foot traffic when things are slow for other stores.

And Greg Stephens of KidZania USA said that the main demographic — and audience — is the child. “The children need to be happy for the experience,” he said, discussing the indoor theme park. “I want them to be in awe when they walk in.”

Another concept discussed was that of adaptive re-use, which is important, especially in this day and age of dying malls. Speaking of which, Stephens said that an empty anchor space in malls were good sites for his company, but Baron noted that “it’s difficult to take any existing box and turn it into a movie theater. The ceiling heights tank the deal.”

Vaughn, in the meantime, said he likes the idea of adaptive re-use coming from empty retail space. “It’s more cost-effective from the live-music perspective to re-program space, than to build from the ground-up,” he said.