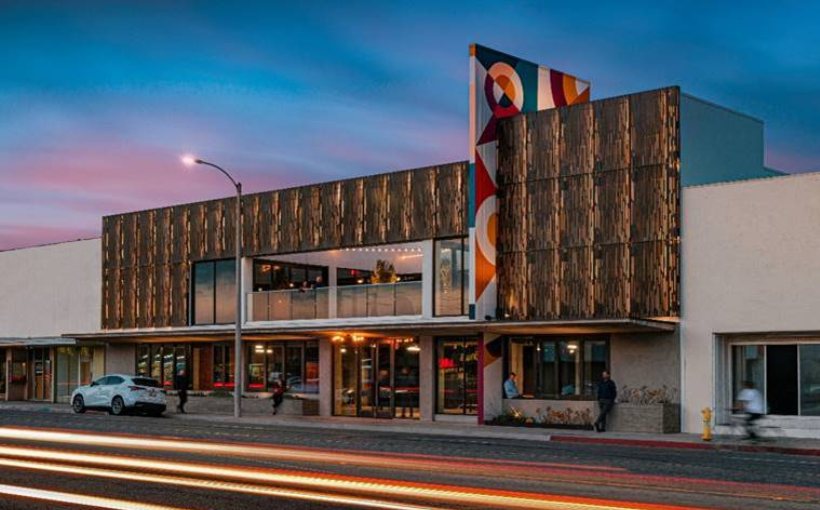 Former JCPenney Gets New Life as The Exchange

The JCPenney store in Bellflower operated between 1952 and 1979. Originally part of Bellflower’s Main Street corridor, this section of Bellflower Boulevard was bifurcated in 1965 by the construction of the 91 Freeway, causing it to gradually decline. The completion of several nearby regional malls during this time accelerated that demise. In recent decades, the store was abandoned and fell into disrepair.

Developer/builder Howard CDM and Studio One Eleven stepped in to bring the building back to life by exposing its concrete structure, red brick and wood ceilings. The new development – The Exchange– furthers the revitalization of downtown Bellflower. The development has already spurred additional investment in the neighborhood and ensured its relevance for at least another half century.

The partnership adapted the 1950s store at 17434 Bellflower Blvd. into creative office, co-working and food-maker space. The 41,000-square-foot Exchange houses the new headquarters for Howard CDM (relocating from Long Beach) on the third floor, a co-working facility (Ironfire Workspaces) on the existing mezzanine, and a maker space of food and drink brands to be announced at the ground level. A new mezzanine was constructed at the front of the building to provide street-level activity.

“With The Exchange, Studio One Eleven and Howard CDM further partnered with the city of Bellflower to bring vitality to this city south of Los Angeles,” said Michael Bohn, Studio One Eleven senior principal. “There is tremendous potential in recycling classic buildings such as this. It was scheduled for imminent demolition before the team rescued it with a viable adaptive-reuse plan. This re-imagination as a retail and office destination is a crucial step in uplifting the surrounding community.”

This public-private collaboration begins construction soon and is expected to be completed in summer 2022.