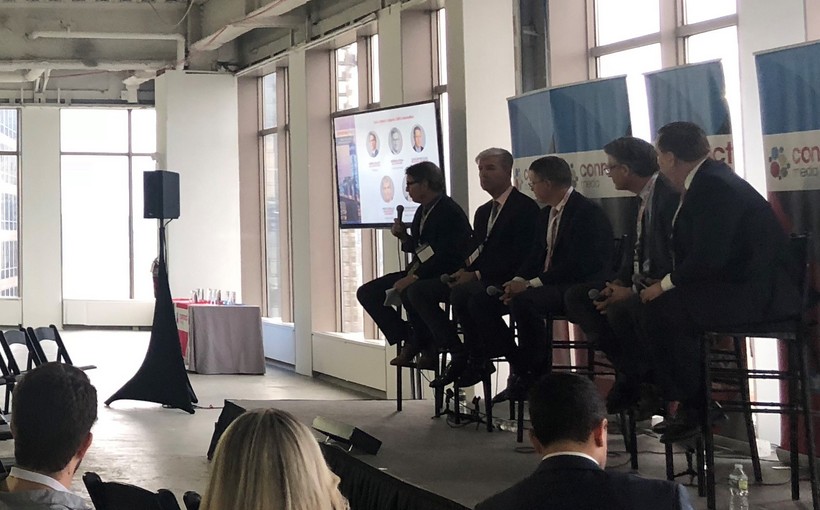 East Side, West Side: “There’s Room for All of Us”

The original rezoning plan for the Hudson Yards district on Manhattan’s Far West Side was to “reinforce existing neighborhoods, while transforming underused areas into a thriving and desirable urban district.” Thanks to developers such as Brookfield and Related Cos., mission accomplished.

East Midtown could hardly be called underused, and it certainly is thriving, but its existing zoning laws essentially froze it in time in an era of projects such as Related’s Hudson Yards mixed-use development. Now East Midtown too has been rezoned, and JP Morgan Chase’s plan to tear down its headquarters at 270 Park Ave. and replace it with something much taller is the first manifestation of that.

To provide a look into the future that these rezonings will help make possible, leasing executives from Related and Brookfield joined other experts for a Connect New York panel titled “East vs. West: A Seismic Shift in Manhattan.” Although he wondered aloud whether the panel’s title was a misnomer and suggested that “Rebirth and Renewal” might be more appropriate, moderator James Wacht of Lee & Associates concurred that the changes wrought by the rezonings were momentous.

The amount of office space that the East Midtown plan will add to the skyline is smaller: about 16 million square feet, and over a span of several years at that. However, Fred Cerullo, president and CEO of the Grand Central Partnership, said the rezoning would only enhance what is already there.

“One of the benefits of East Midtown is that there is no greater community with such a transit-rich environment,” said Cerullo.

“There’s room for all of us,” Cerullo said. “East Midtown is not going anywhere; it’s going to continue to grow.”

Although the Far West rezoning occurred in 2005, Brookfield’s vision for what it’s now building as Manhattan West has been marketed, in the background, for the past 40 years, said Brookfield’s Duncan McCuaig. In the interim, the firm redeveloped the World Financial Center in Lower Manhattan as Brookfield Place, and brought a number of place-making lessons learned on that project to Manhattan West.

One of those lessons was the importance of office and retail co-existing within the project’s footprint. And just as Brookfield Place and the larger post-9/11 revitalization of Lower Manhattan wouldn’t have been possible without a substantial increase in the area’s residential population, so Manhattan West and Hudson Yards will benefit from the influx of apartment dwellers on the Far West.

And even as traditional big-block office occupiers move into the newer product, other users may take their places. Vicus Partners’ Andrew Stein noted that healthcare systems have begun to fill some of the large floorplates left vacant by financial services firms.

“It’s just a constant continuum of changes, and will all be positive in the long run,” McCuaig observed.

|Development
New York & Tri-State
Retail|Office
East Side, West Side: “There’s Room for All of Us”
Paul Bubny
April 24, 2018