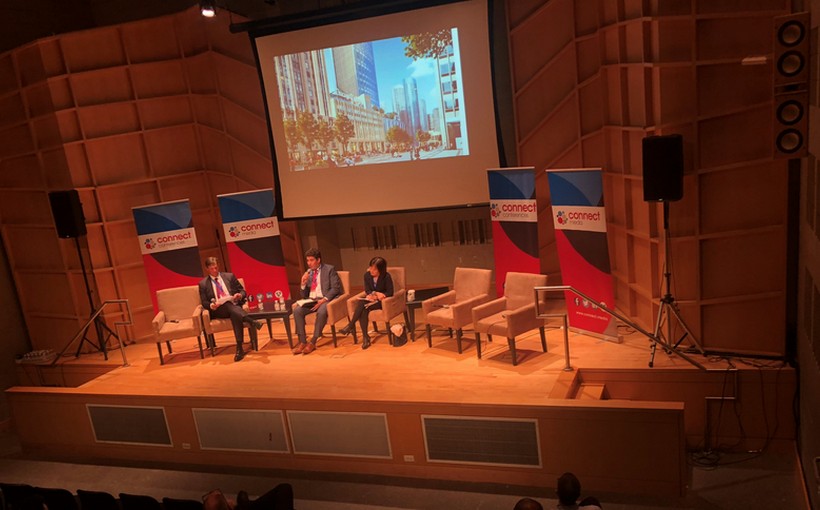 Two developers with decades of experience and different positions in the marketplace. One is a boutique shop with a longstanding reputation as an early mover into neighborhoods that later gain undeniable momentum. The other is a nationwide owner/operator with more than $29 billion worth of real assets.

Yet, as Margarette Lee of Youngwoo & Associates and Doug Faron of CIM Group charted some of their successes for the audience during the “Art of the Deal: Creating the Next Mega-Deal” presentation at the recent Connect National Investment & Finance conference, some common themes emerged: Recognize opportunities and be prepared to act on them. Go in with a sense of the site’s highest and best use. And last, but certainly not least, as Faron put it, “Be a great partner—a partner to the community and to the lender.”

On their forthcoming redevelopment of the iconic Tribune Tower in downtown Chicago, CIM and partner Golub & Company engaged the surrounding community “to find out what the right outcome would be,” Faron said.

The plan presented by the partnership this past spring calls for converting the property at 435 N. Michigan Ave. into 163 residential condominiums, and also building what would be Chicago’s second-tallest tower elsewhere on the site that CIM and Golub acquired from Tribune Media.

Closer to the Manhattan locale of Connect Media’s first-ever nationwide investment and finance event, CIM partnered with Macklowe Properties in the redevelopment of the former Drake Hotel site at 432 Park Ave., a project born in the waning days of the previous cycle.

Despite coming into the scene in the aftermath of the Great Recession, said Faron, CIM managed to pull off “one of the most spectacular projects,” building a supertall residential tower that set a new record citywide for sales volume. As of this past February, sales at the 1,396-foot condo tower had surpassed $2 billion.

“It was great timing, a great basis and great execution” that led to 432 Park’s success, Faron said.

By comparison to downtown Chicago or Midtown Manhattan, the southwestern Bronx has less visibility on developers’ radar screens—or it did when YWA bought the General Post Office there in 2014. Now, said Lee, “there are so many developments going on around us.”

Four years ago, YWA paid $117 per square feet to acquire the 175,000-square-foot, landmarked property that it’s redeveloping into office and retail space. Today, Lee told the Connect Conferences audience, it likely would fetch twice as much on a per-square-foot basis.

Similarly, West Chelsea was years away from achieving its present-day status as a tony residential enclave when YWA began developing its Sky Garage residential project there. And,when YWA acquired Pier 57 in 2009, few would have anticipated that Google would one day become a major tenant at the mixed-use complex that YWA and partner RXR Realty have built on the waterfront.

“We have a nose for opportunistic deals,” said Lee. “We don’t have an asset class that we home in on,” but instead base the project on what the property and the neighborhood call for. Marcus & Millichap’s Eric Anton moderated the “Art of the Deal” discussion.

Connect With The Panelists