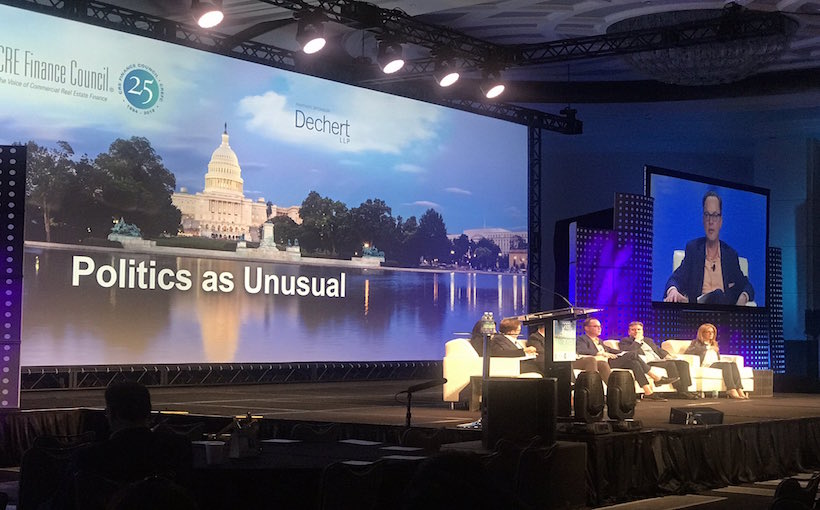 The current political climate was a top line topic among panelists at the CREFC Miami conference, a discussion that immediately focused on the ongoing government shutdown. A summary by Morningstar Credit Ratings, LLC notes participants were concerned about the long-term ramifications of the conflict.

Morningstar’s Caitlin Veno writes the panel of industry experts also debated on how the new Congress will handle issues related to the commercial real estate industry, such as the National Flood Insurance Program and the Terrorism Risk Insurance Act. Both are set to expire in the coming years.

But front and center was the shutdown and its ramifications. To be sure, many commercial real estate professionals likely experienced the effects of the government shutdown firsthand as they convened in Miami Beach, points out Morningstar’s Veno. During a panel on the unpredictability of the political landscape titled “Politics as Unusual,” Compass Point Research & Trading’s Isaac Boltansky noted, “Just today, one out of 13 TSA screeners didn’t show up for work.”

CREFC’s Marty Schuh believes that the most likely scenario for ending the shutdown remains the emergency option. That would involve President Trump declaring a national emergency, and Congress passing a bill to reopen the government either before of after the emergency declaration. To block the wall, the Democrats would likely sue, pushing the issue into in the courts for the foreseeable future.

Boltansky agreed that the emergency power avenue was the only way, because it will end the shutdown and move the immigration debate to the courts and away from the newly-formed Congress. Panelists conjectured what kind of precedent would be set under that scenario. Boltansky noted Republicans he spoke with are worried that the emergency option could have long-term repercussions. It would bring up the question of what constitutes a national emergency, and if it could apply to other hot button issues like gun control and climate change?

Boltansky’s main concern was the debt limit, which is slated to be reinstated on March 2 after being suspended last year. He lacks confidence that navigating the debt ceiling will be an easy process, and he believes the fallout would be far more consequential to the financial services industry.

Morningstar’s Veno writes panelists were also concerned about the effectiveness of the new Congress on issues relating to the commercial real estate industry. High-profile topics, such as the investigations into the Trump Administration, may overshadow issues of importance to commercial real estate. Other than “must-pass bills,” Schuh is fearful that “we’ll miss the opportunity to be a constructive Congress” until 2020.

That may impact the National Flood Insurance Program, which expires after May 31, 2019, as well as the Terrorism Risk Insurance Act, which was extended again through Dec. 31, 2020. Not funding these programs would be a major disruption to the industry. Boltansky also believes that these issues are of crucial concern to the commercial real estate industry.