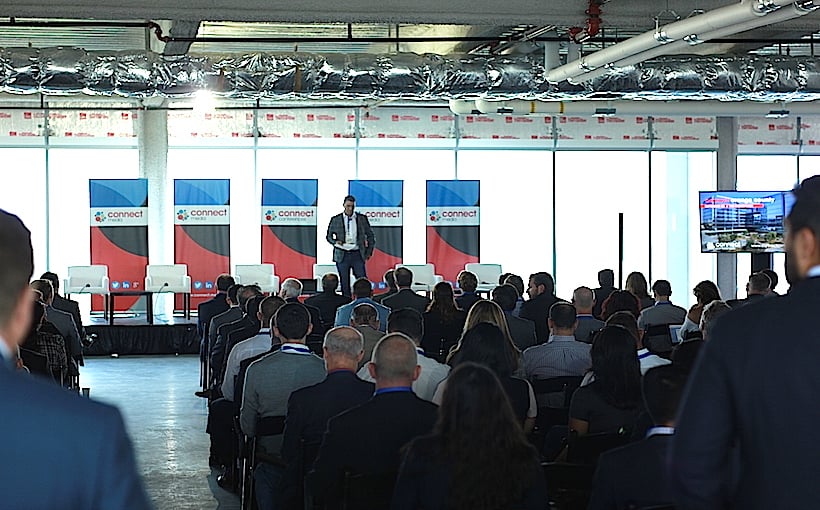 Nearly 450 commercial real estate leaders gathered in Irvine on Sept. 25 for Connect Orange County. The event kicked off with tours of Trammell Crow Company’s newest office development, The Boardwalk OC, and concluded with a cocktail reception on the eighth-floor outdoor terrace overlooking the two-acre courtyard. Four panel discussions included an overview of development activity and financing of projects by high-level leaders, an overview of redevelopment efforts across the county and how industry pros are getting deals done today.

The afternoon commenced with conversation about legislative issues impacting CRE with a panel titled, Ballot Initiatives and Legislative Update. The critical issues covered included Prop 10, the split roll tax and CEQA. California Apartment Association’s Thomas K. Bannon pointed out the repeal of a law passed 22 years ago called Costa Hawkins would likely stop development of new multifamily projects, and properties could see a 15% to 25% decrease in value, noted Bannon.

Prop 10 places local jurisdictions in the drivers seat, and would allow an environment of “radical rent control” to grow across the state, said Bannon. “Prop 10 will exacerbate California’s housing crisis” to a level not yet seen, he predicted.

NAIOP SOCAL’s Peter Herzog agreed that Prop 10 would negatively impact housing, which would make it “tough for companies to attract and retain employees because of the lack of housing” and the resulting high cost of housing in the state.

Bannon said the initiative is a major concern since it removes the certainty that Prop 13 provided for so long. Under the new measure, property owners could see taxes increase by 10%  to 30%, and properties would be re-assessed every three years, rather than the current system that resets when a property is sold.

NAIOP SOCAL’s Herzog said this initiative is “the No. 1 issue for commercial real estate.” Since owners typically pass through increased costs to tenants, they may not feel the pain initially, though he points out eventually, “tenants will find it tough to deal with big NNN increases,” and that could lead to higher vacancies. Bannon called the Prop 10 and split roll tax a potential “double-whammy” for the state that would be felt in 2021.

What it Takes to Get A Deal Done Today: Investment, Financing and Leasing panel

Cox, Castle, & Nicholson’s David Wensley pointed out that there is plenty of capital chasing deals. He noted a recent deal where four to five lenders created a “very competitive” situation. Yet, the “interest rate movement has placed pressure to make choices quickly,” he said.

Marcus & Millichap’s Michael Derk noted that there’s a “ton of capital in the market,” and the “darling” property sector of the finance world is multifamily. That is followed by the industrial product type. He said a critical issue to watch is the recent change in tax credits for corporations, which caused yield to increase and placed pressure on interest rates. That caused lenders to “react quickly,” and rates went up and cap rates remained the same.

Harbor Associates’ Paul Miszkowicz says there’s plenty of available capital and doesn’t see a repeat of 2008-2010 on the horizon because deals are being underwritten accordingly. That means lenders are taking into account potential factors such as non-recourse, vacancies, free rent, as well as the product and market.

Passco Companies’ Gary Goodman, says they remain “bullish on multifamily” properties in secondary or tertiary markets because the sector has proven to “beat performance expectations” relative to other property types, even in downturns.

SRS Real Estate Partners’ Rich Walter says the retail sector is now focused on two groups: Millennials and Baby Boomers, since they have cash flow and disposable income. Yet, each have different perspectives and preferences that retailers must know and understand. “We look for established communities now,” he says.

Redevelopment and Reinvestment in OC panel

Pendulum Property Partners’ Kevin Hayes said his company is pursuing a number of redevelopment projects across the region. They ranged from a mixed-use project in Huntington Beach that encompassed a “complicated entitlement process” even though Pendulum wasn’t changing uses, to a 12-acre office re-entitlement project in Ontario.

Paragon Commercial Group’s Jim Dillavou said his company pursues retail redevelopment projects, mainly in partnership with CalPERS, that are focused on value-add plays. “We like tough, difficult deals that are hard for owners” to execute without deeper pockets. The company is able to bring capital to the table to help revitalize properties in the right community.

John Hancock Real Estate’s Ray Rothfelder said a strategy his company has adopted and strives to achieve is “total integration.” That translates to a mix of uses and amenities that are brought “together on one project,” he said.

CBRE’s Kurt Strasmann said one of the biggest trends he’s noticed is “the hospitality experience is what users now expect in office projects.” This is being driven by companies placing a high priority on attracting and retaining employees, Strasmann said.

NKF’s Greg May agreed, saying that Orange County has a “pricing advantage, an amenity advantage, plus the beach.”