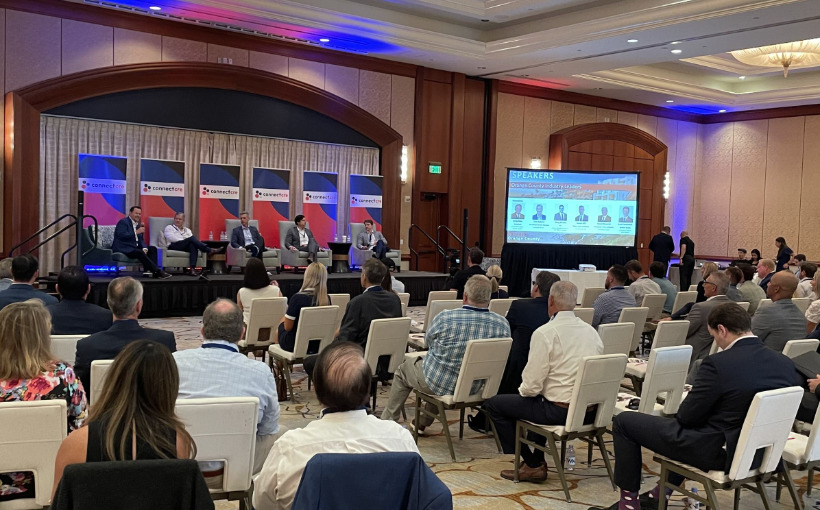 Getting Deals Done Today: Transacting in a Bifurcated Market, the third and final panel of the day, moderator Julian Freeman of Cox, Castle & Nicholson, was joined by Parker Jones, of West Coast Real Estate; Rick Putnam, of Kidder Mathews; Brett Turner, BKB Capital partners, Andy Bratt of Gantry and Clayton McFadden of Harbor Associates. The conversation, which was part of Connect Orange County 2022, a one-day gathering hosted by ConnectCRE at the Balboa Bay Resort in Newport Beach, CA, focused on how lease, sale, and financing deals are getting done in today’s market across property types.

The first question to the panel was how are the capital markets reacting to the current rate changes and the pangs of recession, particularly in how it’s affecting the slow office and the hot industrial markets?

“Recently, a lender told me this, ‘This is a lender favorable market.’ It was a bank that really stood out to me, and it sets the backdrop for what I’m about to say. There’s been a general pull back in debt equity. Lenders are being more conservative. We’re facing lower leverage, higher interest rates, which is putting pressure on debt cover ratios. Banks are very conservative and prefer working with existing customers and clients and life insurance companies,” said Bratt.

However, there is some good news. The panel agreed that money is still out there, but office is facing the most headwinds in the market. Indeed, Bratt added that some lenders have completely eliminated office from their services. Industrial, on the other hand, is on the other side of this, where lenders are actively engaging with this market.

From the industrial standpoint, Putnam of Kidder Mathews, who noted that his office is most active in this market, said from the standpoint of transacted deals, there is uncertainty simmering in the market.

“We don’t have a trend that’s clearly up or clearly down right now. A united uncertainty is coming from all kinds of places. We have the political stuff, that inflation thing, interest rates are up, and the stock markets are down. So, the clients we are working with are reacting to those dynamics. This is a little different, yet it’s clearly not a systemic issue like we had in 2007 and 2008. It definitely is a bifurcated market on the industrial side but from the demand standpoint we are not seeing any pullback in demand for leasing. “

On the leasing side, Jones of West Coast Real Estate said: “Tenants are definitely across the board, whether you’re a mom and pop or a Fortune 500 company. The demand is for less square footage. The good news is a base is being formed right now as the markets recover. We represent up and down the coastal area in Newport Beach and Irvine, and occupancies have been normal. We are confident our product is well positioned so we’re not concerned about the downturn.”

McFadden of Harbor Associates addressed the Class A City Center office perspective in comparison to what it’s like in the tertiary markets. “Tenants are always looking for a lower deal. They want more flexibility; they want higher quality and type of office space. Some are downsizing.”

In regard to office, clearly the pandemic, which resulted in a virtual working environment, has been a big player in the office market’s problems. In fact, with more employers dealing with workers leaning toward the virtual model, office space is not exactly in big demand.

“The hybrid model is going to be a part of our business model,” said Turner. Jones added: “You have to provide an environment that is flexible, as more offices are mandating two to four office days.”