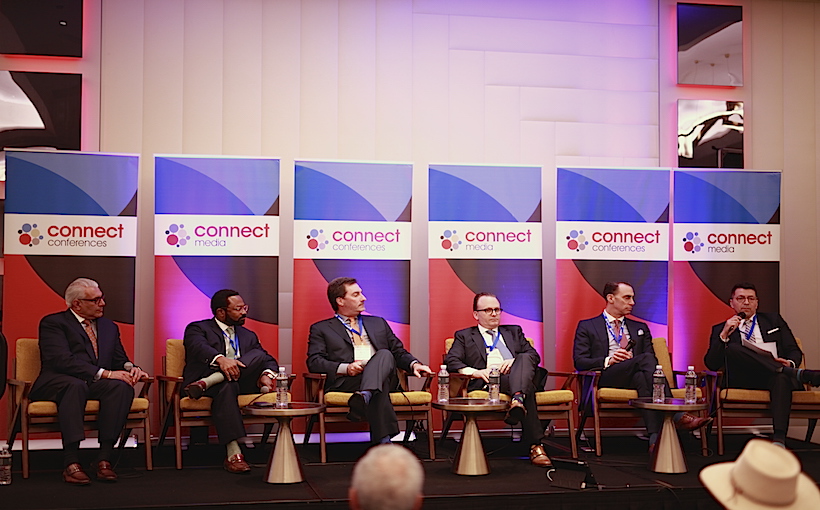 Connect LA: Is the Market Headed for a Recession?

Connect Real Estate Los Angeles featured a jam-packed afternoon of conversations, networking and presentations. More than 500 gathered at the Hotel Indigo in DTLA and heard from commercial real estate leaders and economists about the trends driving decisions in Los Angeles.

The afternoon featured a keynote conversation between the City of Los Angeles’ Jan Perry and CBRE’s Lewis Horne about the biggest trends shaping the market. That included housing, infrastructure, development, preparing for the Olympics, and the role CRE can play in the process of building a better city.

We also celebrated Connect Media’s Top Broker and Women in Real Estate Award winners with a live presentation. Here’s a few highlights from the day’s discussions; we will be taking deeper dives into each panel in the coming days.

Los Angeles’ most active investors and developers shared insights into the market, factors driving redevelopment and new development opportunities, as well as a regional view on investment, development and asset performance in SoCal.

Cushman & Wakefield’s Marc Renard noted there hasn’t been a more “intriguing time” to be in commercial real estate given the opportunities and threats to the business. “There’s real changes occurring that commercial real estate needs to be cognizant of,” he said. But for those who anticipate correctly, “there’s alpha returns if you get in early.”

Rising Realty Partners’ Chris Rising says it is important today to consider more than just rent costs. Companies kicking the tires on space now look at total employee cost, as part of a location search. They want to make sure the work environment – including amenities and surrounding neighborhood – allows them to compete for great employees.

Bentall Kennedy’s Amy Price suggested a savvy investment or development strategy is to follow where talent wants to be, as well as where jobs are. That’s a shift from 10 years ago, when people made lifetime commitments to a job. Today’s employees are more willing to change jobs for a better opportunity. Top companies attract talent and that’s become a significant driver of where people want to be now.

Jamison Realty, Inc.’s Jaime Lee pointed to a rise in construction costs over the past several years, as well as restraint within the capital markets.

Economic experts examined the labor and housing markets, job growth, demographic trends, and other key drivers influencing the national, state and regional real estate markets. The robust discussion delivered valuable insights about the indicators that determine the strength of the economy, as well as noted the potential for a recession.

Beacon Economics’ Christopher Thornberg said that those concerned an economic recession is just around the corner given the length of the recovery pointed out “the length of an expansion doesn’t determine when it will end.” Rather, he says, it is a “negative shock” that pulls an economy into a recession. But he believes the strong fundamentals just don’t add up to a “problem now.”

USC Lusk Center For Real Estate’s Richard K. Green believes the economy has some run left in it, though advises to be prepared for a gloomier picture in 2019. He noted a couple of sage investors who have historically had “good judgment” have already divested most of their properties, which could signal the current cycle may be nearing an end. He also is concerned the nation’s governmental leaders are potentially making decisions, such as the tax cuts, that could create the “shock that could drive us into a mild recession,” he said.

Leadership Insights: A View from the Top

Lee & Associates’ Jeff Rinkov believes SoCal is experiencing a tremendous period of growth that likely could lead to a new “jumping off point into a new growth cycle. We are poised for several years of growth,” he said.

Colliers International’s Martin Pupil agreed that there’s runway room left, with good fundamentals and demand. Construction lending is “tough” and that has perhaps “slowed down development,” but he doesn’t believe the market is in a recession.

Avison Young’s Mark Rose pointed out that the population growth projections of three billion over the next 30 to 40 years will create sufficient future demand drivers since those people will need jobs and places to live. That is a good underpinning for the commercial real estate sector because that underlying stability and growth is expected to translate to a solid future for CRE.

Marcus & Millichap’s Hessam Nadji noted that the usual indicators leading up to a recession are not present, those being over building or over leveraging. He says, the benefit of the type of “slow recovery” currently being experienced since 2010, though “frustrating in fashion” has created “cycle longevity” and one that’s “less intense, with less build up and less bubbles that likely has more staying power.”

NKF’s Craig Robinson noted his concerns about the economy and any potential downturn relate to the uncertainty coming from the White House of late. It could be a Black Swan event or something that can’t be predicted of planned for, he says.

A Look into Financing LA’s Deals

Expert panelists from across the capital stack discussed the drivers, obstacles, and financing programs borrowers want. They took a look at what’s succeeding, what’s changing, and what financiers see for the year ahead for the LA market.

George Smith Partners’ Gary M. Tenzer noted that they are seeing a steady flow of deals that aren’t slowing down. He expects to do a similar volume as last year on both the debt and equity sides, though strategies may have changed as investors replace fixed loans, pull out cash and lock in new 10-year fixed rate deals. He noted that debt funds are active and spreads are coming in aggressive. Institutional investors prefer two types of properties today, multifamily and well-located industrial.

Hunt Mortgage Group’s Peter Clasquin said that the interest rate increases have been offset by rent increases. He notes the keys to the company’s success has been to find “better borrowers” and adhere to “better underwriting.”

CapitalSource’s Tom Whitesell said the new proposed HVCRE regulations should help clear up “confusion in the market” about how the rules were being applied. Each regulator approached lenders how they saw fit, often “treating them differently or unfairly.” The new regulations “will bring clarity” to the lending market, though could attract more competition to the market.