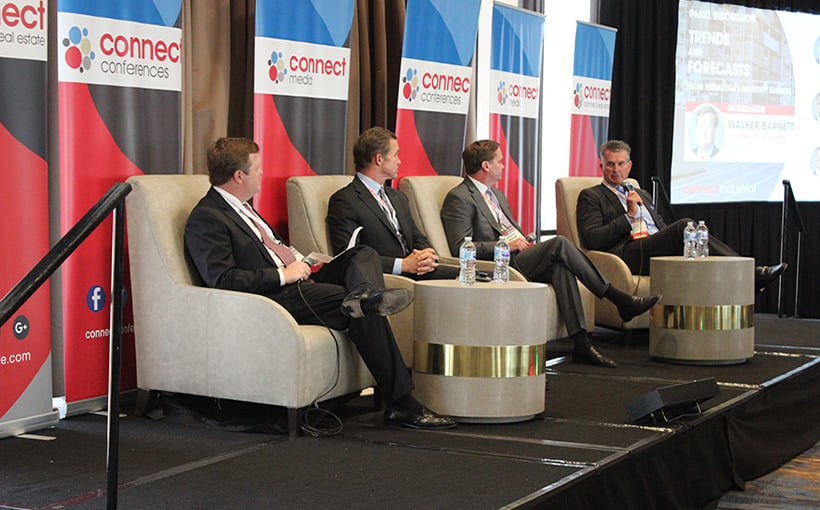 While Connect Industrial’s “Trends and Forecasts from Industrial’s Industry Leaders” panelists focused on just that, the first question asked, immediately out of the gate, by the moderator, Colliers International’s Walker Barnett, dealt with . . . labor. Namely, labor’s impact on industrial.

Jeremy Garner of Trammell Crow indicated that one impact on industrial product is that said product is no longer the somewhat untidy spaces of days gone by. “Tenants are amenetizing spaces in ways we haven’t seen before, whether climate-controlled warehouse spaces, café-like finishes in the break room. We’re seeing much nicer buildouts, in an effort to attract and retain employees,” he said.

NKF’s Paul Klink agreed, adding that other methods of attraction and retention are increasing wages. He used Tesla as an example, indicating that, as of Q1 2020, the automaker is planning to offer a $20-per-hour minimum wage to attract workers to the company’s Gigafactory near Reno, NV, primarily because it’s not exactly in a prime location. John Morris with CBRE built on the topic, by pointing out that GDP growth tracks the growth of the labor force growth, adding that, “where we are with the labor supply today will constrain development. In our business, absorption also tracks GDP and labor growth.”

The panelists also delved into the potential softening of the sector; Klink observed that some of the larger occupiers are starting to give back space. “Not a lot,” he said, “But enough to attract notice.” Garner, meanwhile, pointed out that the trend is toward more build-to-suit developments than speculative product. “This goes into positive numbers, but when you look at overall absorption, it’s starting to plateau, with a handful of large deals accounting for absorption. We’re seeing fewer deals, overall, taking place.”

Still, even with potential headwinds, the panelists were optimistic in terms of outlook. Morris noted that, while there seems to be more supply than demand, based on the numbers, the sector is in a period in which supply is catching demand. “Much of the current vacancy is not what people need today, so we’re not seeing much oversupply.” Meanwhile, Garner pointed out that the economy is “continuing to provide us with tail winds,” with absorption remaining historically strong. He did allow, however, that even with healthy absorption numbers, construction needs to scale back to avoid oversupply.

Klink, meanwhile, observed that, from the occupier standpoint, 2020 will bring some large changes, with electronics companies, in particular, likely to introduce many new products. “When it comes to real estate,” he added, “there is no better space to be in. It’s hard not to be optimistic.”

Connect With the Speakers