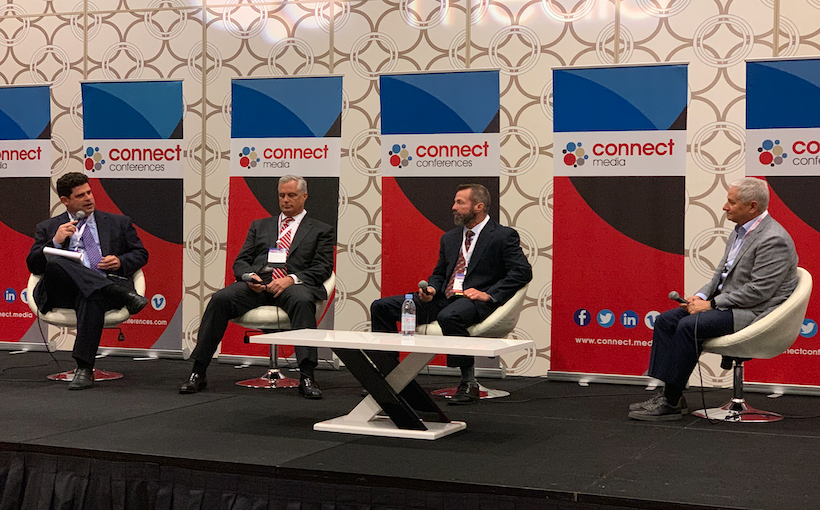 Moderator Andrew Fogg, partner at Cox, Castle & Nicholson, began the panel conversation with the overall question of which trends and issues the panelists are seeing in the multifamily sector. Not surprisingly, supply and demand was the topic of the day.

“At least in California, there isn’t enough supply and there is excess demand,” Altshuler said.

Day noted that construction costs are putting a cap on the supply side, but did mention there is a softening in the higher end of most markets. Alternatively, he commented the East Coast was a differentiator. “This [the softening of most markets] is not the case in the Northeast,” he said, calling out higher-end areas including Manhattan, New Jersey and Massachusetts.

Said Fink: “Right now, it’s a seller’s market. It’s great to be a seller and bad to be a buyer because of the competition of capital.”

To that end, Day has watched the core category and institutional space in multifamily becoming a lot less popular due to a lack of investments. “There is less core fundraising by institutional investors resulting in fewer and fewer acquisitions.”

“Institutional capital is looking to spend its money for the best return, and it looks like buying apartments is the vehicle where there can be a lot of return,” he continued, adding that capital is coming from both institutional and private investors. The panelists agreed that foreign investment interest is growing rapidly.

The paradox of the excess of capital and lack of acquisitions in multifamily is the challenge of low expected returns, which are based on low interest rates, thus slowing rent increase.

When it came to rent control, the panel noted that rents are a function of supply and demand. “Instead of talking about economics,” Day said, “let’s figure out how to create more units.”

The panelists expressed the idea that there is an affordability “shift” that is not just a city, state or even country-wide issue. “Berlin is seeing an affordability housing issue, as well,” Fink noted.

During the conversation, most panelists agreed there is pressure put on officials, “that we’ve never seen before,” Altshuler said. Housing affordability is a real issue, and there seems to be a trend. “I’m seeing things happening very quickly – especially legislature.” He noted that particularly in California, the legislature is trying very hard to pass laws regarding rent control.

“This year alone, Oregon recently passed the first state-wide rent control,” Day said. “While other states are trying to attack rent control similarly, New York was recently able to dramatically expand rent control and it was a surprise to a lot of people.”

“I spend most of my time in New York, and it’s really shut the multifamily market down,” Fink said. “The legislation that has been passed doesn’t give you benefit, or take into account, upkeep or the ability to upgrade buildings. If we want to be in business for an extended period of time, we have to be able to create value for society in some way.”

Connect With The Speakers