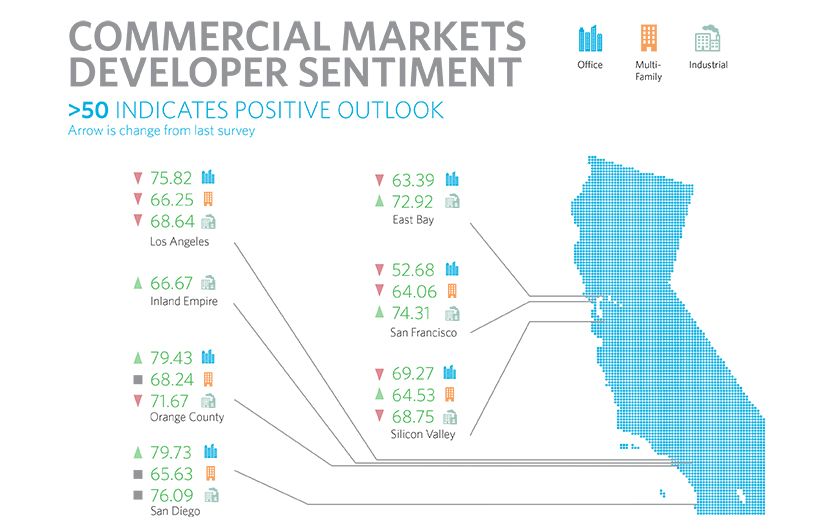 The latest Allen Matkins/UCLA Anderson Forecast Commercial Real Estate Survey was released last week, reporting that the industry is doing well across the state throughout many sectors and regions. We spoke with Tony Natsis, a partner at Allen Matkins, who practices out of the firm’s Century City office, about California’s industrial, multifamily and office markets. He illustrates what is a strong market not expected to have any downturns in the near future.

This is the first time you have had a retail focus with your report. We know that industrial is hot all over the state. How are the two commercial real estate sectors connected?

One of the reasons the industrial market is hot is because of all of the e-commerce. The growth you see in areas like the Inland Empire with increasing activity, low vacancies and high rental rates, is a result of the e-commerce crowd that’s trying to deliver product on the same day or the next day. So, there is a direct linkage between industrial rates and reduction of vacancy in the Inland Empire and around the ports of Los Angeles and Long Beach that is all being driven by e-commerce.

The speed of delivery has become a really big issue with the Millennials [I have three of them at home]. They are super impatient to begin with, so same-day delivery is the best thing you can offer, next-day delivery is really good, and apart from that they consider not making the purchase.

The multifamily market across the state is very strong. Are there any consistencies across the markets that you covered?

The main thing driving the multifamily market, whether rental or for sale, is the health of the economy. If the economy is strong, purchasers are willing to buy into newer rentals or condos, because they have more disposable cash to invest.

Secondly, these multifamily buildings are in areas with the highest amount of employment growth and users of space, especially on the office side. Investors are smartly building in areas like San Francisco’s SoMa, and they’re trying to build in West Los Angeles. These are places where you know there is a certain amount of demand. So it’s not surprising that rental rates are going up and vacancy rates are going down because all of the economic indicators can be checked in advance. It’s not as risk-oriented as other places where real estate is being built.

Speaking of SoMa, is the surging office market in San Francisco getting overheated?

Anything that is near term, existing or vacant, is pretty leased up. If there is something available a lot of tenants would try to gobble it up. I don’t really see an end to that. SoMa could be a lot bigger and have a lot more property under development, so it should still do really well. San Francisco has Millennials who consider it a very cool city. Plus, it has amenities, public transportation, and it’s a hot place to live right now.

What’s driving the office sector in other parts of the state?

North County in San Diego has military and biotech, as well as technology. There are also startups and venture capitalists. And it’s a great place to live, so that area is doing fairly well. Insurance companies and banks are also very interested in North County.

Orange County has diversified. It’s no longer based on financial-mortgage companies, and they have a higher employment base. A lot of the really big players want to invest there.

West Los Angeles is totally on fire and has both the technology and entertainment industries. There is also a very limited development opportunity, so there is limited vacancy, and it’s a great market. People want to buy almost anything you can buy there.

In the Silicon Valley, you have to split up the markets. Palo Alto, Sunnyvale and Mountain View are very hot because you have LinkedIn, Google, Microsoft and others going into those areas. Santa Clara is also a good market. Some of the other locales, such as San Jose, haven’t quite recovered, but big pieces of the area are very hot. People want to live there, the big companies want to be there, and I don’t see an end to that.