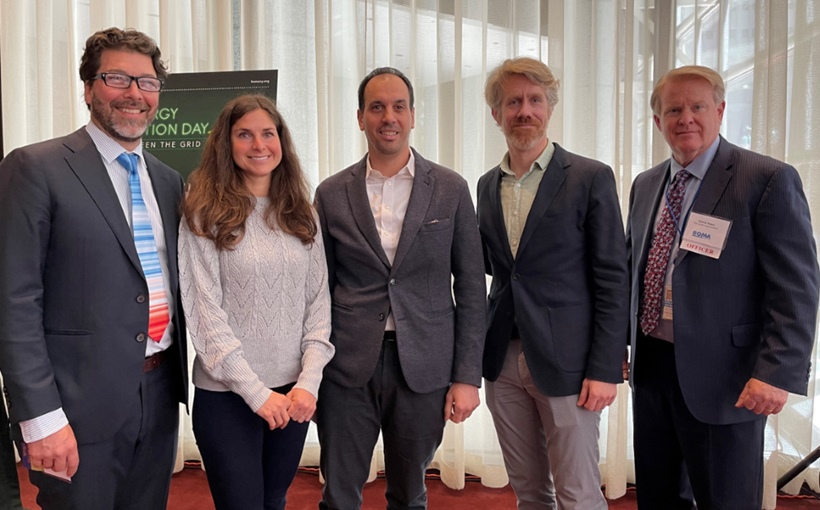 BOMA New York’s annual Energy Action Day filled Club 101 with CRE professionals to learn how New York State proposes to “Green” New York City’s electric grid, as well as what some of the top building owners and managers are doing to further reduce greenhouse gas emissions and de-carbonize the economy.

Citing actual case histories and present-day implemented strategies, commercial real estate leaders at the event, together with officials of NYSERDA, the State’s energy research and development agency, delivered a highly encouraging message: Actual, physical, and measurable progress is being made to meet the State’s clean energy goal to reduce greenhouse gas emissions by 85% from 1990 levels by 2050.

Susanne DesRoches, NYSERDA Vice President, Clean and Resilient Buildings, delivered the rousing Keynote Address. “The plan is convincing,” she said, “renewable energy will power most of New York’s economy by 2050.”

By January 1 of 2023, the master plan for meeting that goal, as drafted by the state’s Climate Action Council, will be delivered to the Governor and State Legislature. Notably, Ms. DesRoches cited the well-known fact that the largest source of emissions, by far, is buildings. “Our six million buildings in New York State were mostly constructed before there were energy use surveys.”

On the bright side, however, she cited a “roadmap” to achieve a carbon neutral building stock by mid-century. “We’re working on how to map this out,” she said, “highly efficient systems can reduce energy demand; on-site energy sources can be decarbonized; clean energy sources will proliferate across the spectrum from on-site, community and the grid.”

DesRoches said, “By 2030 more than 200,000 homes per year will need to be energy efficient, and all electric.” But, she added, “We have a lot of work to do. Currently only less than point five percent (.5%) of buildings in New York State are net-zero.” She cited a report by the Urban Green Council that measures energy consumption in New York City’s buildings.

According to the Council, the city’s existing electric grid has the capacity to “support our energy transition.” Nonetheless, she said, “One of the hardest sectors to decarbonize in the built environment are the tall existing buildings in cold climates, such as those buildings that make up the New York City skyline.”

To that end, DesRoches touted NYSERDA’s Empire Building Challenge, which has already awarded $20 million for the first four demonstration projects. Both she and other presenters also lauded NYSERDA’s “Empire Building Playbook,” which was co-developed with Empire State Realty Trust (ESRT) and is an owner’s guide of shared information for low-carbon retrofits.

DesRoches and other presenters at the event stressed the need for owners to make “safe investments” in decarbonization that are aligned with capital planning cycles. “By managing the transition and creating value through short- and long-term actions, urban owners can increase energy efficiency and decrease energy use,” she said.

On the supply side, DesRoches mentioned the Champlain Hudson Power Express and Clean Path NY, both of which were approved by the NY Public Service Commission in April 2022. These initiatives – the largest transmission projects in the past 60 years – will deliver 18 million megawatt hours of clean energy per year direct to the NYC Grid, or more than one-third of New York City’s annual electric consumption.

“Solar is another important part of the energy equation,” she said. She reported that New York is now the top community solar market in the U.S. with over one gigawatt of solar power installed across the state and $5.9 billion in projected investments by the late 2020s.

DesRoches concluded by stressing the importance of partnership and collaboration. The second half of the sold-out event was moderated by Chris Cayten, partner of CodeGreen Solutions and chair of the BOMA New York Energy & Sustainability Committee. He spoke about the importance of sustainability and decarbonization, with a focus on state level initiatives and the impact they have on New York City building owners and managers, followed by an introduction of each panelist.

First up, Michael Reed, Team Lead, Advanced Efficiency Solutions, NYSERDA, presented the business case for decarbonizing the economy. “We have the ability to achieve these goals. What we are really focused on is the business case.” In Reed’s point of view, today’s challenge – and opportunity – is the need to develop public private partnerships to meet climate goals. He said, “It’s how you work with the commercial real estate community to demonstrate what works, and how you support the market and the policies needed to go to scale. Then let the market do its thing.”

Reed added, “What we see is a lot of demand for low-carbon solutions. Consumers, investors and employees; folks are paying a lot more attention to the challenge of climate change. But we are at the very beginning of the journey. Local Law 97 was passed in 2019. The development cycle is 18 months to five years, so the first set of projects are just coming on line in 2022.”

He urged attendees at the event to recognize the critical need to integrate technical analysis with the capital planning process. He made a convincing argument that owners consider their buildings as long-term assets. “Capital is being invested today in energy systems,” he said. “These systems are likely to still be in place in 2040.” He added, “as capital is being invested, we are pushing towards decarbonization and away from straining assets. We are phasing out fossil fuels.”

Reed said that the need for partnerships is around how we achieve the business case for the decarbonization of commercial buildings over these next 10 years.

“I think this is a huge opportunity for real estate to be the good guys. I think this industry is going to lead the transition for the broader building stock in New York City. We can demonstrate to the rest of the market what works and what doesn’t. This is what we’re focused on at NYSERDA.”

Therefore, he said, “Renewables are fine, but there are legacy problems. The solution lies not in renewables, but in efficiency. Circularity at the building sector level is still the cheapest form of energy. The problem? Us!”

As an example, Izzo said, “If we reduce our energy consumption by 50%, the same infrastructure can support two times as many buildings. If NYSERDA is going to decarbonize the grid, we have to decarbonize our buildings.”

As background, he cited his role in Hudson Square Properties, a joint venture of Trinity Church Wall Street and Norges Bank Real Estate Management with Hines, the operating partner. Norges Bank, one of the largest institutional investors in the world, is renowned for its commitment to reversing the climate crisis. Izzo described how Norges Bank introduced Hines to Sweden’s Fossil fuel-free Society. “They have reduced building emissions by 70% over the last 30 years. They electrified their heating and have been using heat pumps for 30 – 40 years.”

Izzo described a fascinating case in which Hines was involved with the development of a new, highly energy efficient building recently. That new project was adjacent to a 1930s-era, 900,000 square-foot, 17-story office building in their portfolio. Would it be possible, even theoretically, to “share” the new building’s efficiencies with the older building? Indeed, Hines focused its attention and resources on hyper-efficiency circular infrastructure for the older building.

In the older building, boilers overheated the building in the winter months. The reality is the cooling system would need to overcompensate, an astounding waste of energy. Using modern technology, Hines found solutions to store heat, and even transfer it among properties. Water is an excellent storage medium for heat, he explained. “Not air.” Quantifiable proof is here. He concluded by saying, “It’s time to innovate in a different way, and innovation is a mindset, not technology.”

The final speaker at the event, Dana Schneider, Senior Vice President, Director of Energy and Sustainability at ESRT, described her experience with energy conservation at the Empire State Building.

She also lauded NYSERDA for its commitment to public/private partnerships to achieve decarbonization goals. She said, “We could not have done this without our partnership with NYSERDA.”

ESRT’s portfolio comprises more than 10 million square feet, she said, and the firm has “already offset 100% of our electricity,” and that the REIT’s entire portfolio will be carbon neutral by 2035. She said, “We never compromise our environmental quality, and we never compromise the healthy building side of things.”

Schneider said, “Our focus on this type of work started in 2007,” inspired by ESRT’s pioneering CEO, Tony Malkin, who, she said, “has valued this approach for well over a decade.”

Schneider emphasized the importance of sharing information with other building owners. ESRT’s industry leading deep energy retrofit at the Empire State Building served as a blueprint for the Empire Building Playbook and demonstrated what is possible within the built environment to reduce carbon emissions. Co-developed with NYSERDA and supported by other NYC-based landlords and the Clinton Global Initiative, the innovative guide outlines the step-by-step process for existing commercial buildings to develop a pathway to carbon reduction with proven returns on investment.

“There are always naysayers,” she said. “Therefore, we focus on continuing to make a quantifiable case: data, measurement, verification and costs.”

All speakers agreed that achieving decarbonization by deep-energy retrofits is not a simple task. Schneider added, “It’s holistic, including a building’s walls, HVAC, energy controls and entering tenants’ space. It’s a behavioral change with so many stakeholders. Knowledge transfer is imperative, and the Playbook overcomes the initial communications gap.”

In conclusion, in order to ultimately achieve carbon neutrality, the CRE industry and public sector will collectively have to overcome major challenges both in terms of developing renewable energy and the infrastructure to transport additional electricity load. It was clear to the event attendees that greenhouse gas solutions are not only ready to consider but are available to building owners to actively implement.