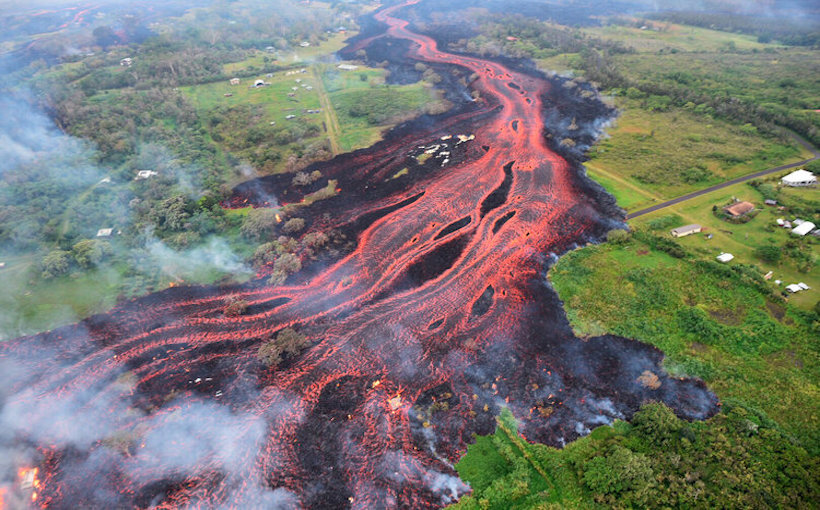 As the Lava Flow Slows, What Happens to Hawaii’s New Land?

After three months of volcanic activity from the Kilauea volcano, the most active lava flow on Hawaii’s Big Island has come to a near halt, according to the U.S. Geological Survey’s Hawaiian Volcano Observatory. The near continuous eruptions for the past three months have added new land – over 120 acres to Hawaii’s Big Island, to be precise. The new outcrop of land created by the eruption currently extends out into the ocean by almost one mile.

As the dramatic pictures of the eruptions and lava flows faded out of the daily news circle, the question arose, who owns the land created by the flow of lava after it cools?

Existing parcels of land that become covered by lava may radically change in appearance, but the ownership remains the same. So, even if your home is now replaced by something that looks more like the surface of the moon, the plot it stood on is still as much yours as before.

However, by definition, land created by lava didn’t belong to anyone before. Most of the newly-created land formed by the cooling of lava often extends into the Pacific Ocean, or perhaps lakes or other waterways. So, is this new land owned by no one in particular? Or, is it owned by the private landowners owning the land contiguous to the lava extensions?

The answer – it’s actually neither, as new land created by the lava belongs to the State of Hawaii, generally. If the land is formed within the boundaries of a U.S. national park, then it is deemed federal land. However, for new land created outside of a national park, it becomes state land. This issue has previously been raised and decided by the Hawaiian Supreme Court. More on that to follow.

Lava flows from Kilauea, the most active volcano on the Big Island, have enlarged the island for thousands of years. A few examples exist within living memory. In 1955, lava flow added nearly eight acres; in 1960, nearly 500 acres; and during the 30-year-long eruption from 1983 to 2013, it added another 500 acres. The last documented eruption in 2016 added five more acres. So, over time, lava flow has clearly expanded the land mass on the island.

The following case, decided by the Hawaiian Supreme Court, set precedent as to ownership of new lava-formed land.

Extra land formed by the 1955 eruption bordered property purchased by Maurice and Molly Zimring in 1960. They assumed that their purchase included this additional land by extension. The Zimrings landscaped this new land, planted trees and even paid property taxes on it. You can imagine their surprise when, in 1968, the state served them with a notice to vacate the lava extension, and initiated a quiet title action. The Zimrings sued, winning the initial case at trial court, but losing the appeal before the Hawaiian Supreme Court in 1977.

The trial court (also called the circuit court) found in favor of the Zimrings, holding that the state failed to carry its burden of proof to establish its title in the new lava-created land. The Supreme Court, however, overturned this decision and found that the state had established its title in and to the lava extension, and that it was therefore the rightful owner. The court ruled that the so-called lava extensions were meant for “the use and enjoyment of all the people” (i.e. the state), rather than to serve as enjoyment for the few random property owners lucky enough to adjoin such bits of ‘new land.’

The Supreme Court started with the general proposition that under Hawaiian property law, the land in its original state is public land, and if it is not awarded or granted to a private party, such land remains in the public domain. The Court went on to state: “There is no indication that pursuant to Government grant, operation of common law, or Hawaiian usage, such land ever left public hands. Title to the land passed to the State from the federal government, pursuant to the Admission Act.” The referenced Admission Act was the federal legislation whereby Hawaii was admitted to the United States in 1959. If you are interested in the case itself, the cite is: State ex rel. Kobayashi v. Zimring, 566 P.2d 725 (Haw. 1977).