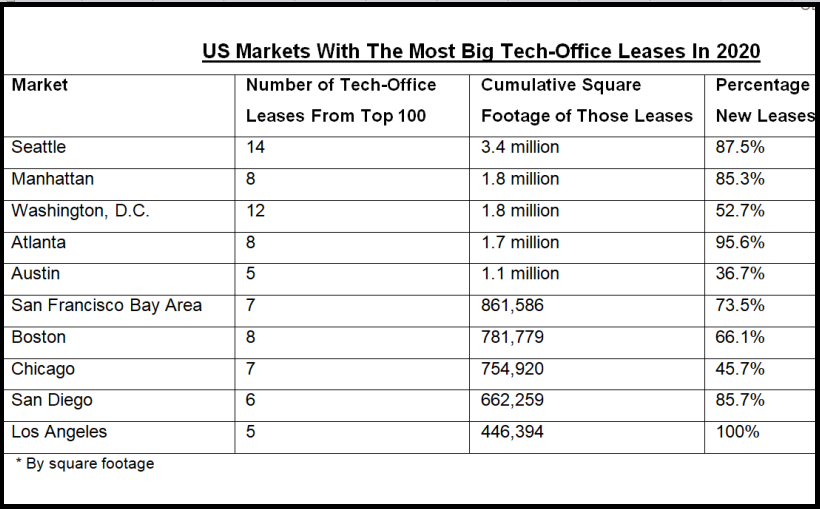 Seattle claimed the top spot among leading U.S. markets for large tech leases, with 14 mega-leases of a cumulative 3.4 million square feet last year, according to a new report from CBRE. This means the Puget Sound region unseated San Francisco, which has held the top spot every year since CBRE started tracking this data in 2013.

New leases, rather than renewals, accounted for most of the 100 largest U.S. office leases by technology companies last year, both in the Puget Sound region and nationally, which helped to reaffirm tech as the most active industry in overall office leasing for a ninth consecutive year. The tech industry retains that title despite registering a smaller share of U.S. office leasing last year (17 percent by square footage) than in 2019 (21 percent). All told, tech office leasing amounted to 26 million square feet last year.

“Software, e-commerce and tech business services companies led activity within the top 100 tech office leases nationally, and those industries are well-represented in greater Seattle. This region is home to some of the world’s top tech companies and talent. While we know the San Francisco Bay Area will remain a leader in tech, it’s encouraging to see the Puget Sound area claiming a larger share of the pie,” said John R. Miller, CBRE senior managing director for the Pacific Northwest.

No more stories
See More Seattle & Northwest Stories
About Connect
Connect CRE offers a fully integrated approach to all things commercial real estate. We deliver an unrivaled combination of content, connections and creativity, produced by a team with decades of commercial real estate experience. With separate but synergistic platforms, we provide our clients a one-stop shop for news and information, marketing and business development strategies, and more.
Advertise with Connect
Reach your target audience with nationwide advertising opportunities, or drill down to your specific market or property type. Connect’s offerings provide increased exposure, followed by viable business development leads.
Connect CREative
A full-service marketing agency dedicated to CRE clients. We combine our extensive CRE background with our team’s business, marketing, communications, technology and design acumen, to develop and execute comprehensive strategies to create, build, and grow successful brands.
Connect Events
Delivering the platform to engage, influence and inform. Whether digital or in-person, we set the stage to bring together the most relevant content with CRE’s most influential minds.
© ConnectCRE 2021 / 3900 San Fernando Road, Suite 1007, Glendale, CA 91204
Contact Us / Policies, Privacy & DisclosuresSubmit Press Release /